Welcome to another one of my post-processing walkthroughs. In this post, we’ll be processing of one of my favorite images from 2017, a beautiful Purple Sunbird that I photographed in Bangalore.

This is the RAW file. First impressions are that it is severely underexposed and the bird is too small in the frame.

A quick crop in Adobe Lightroom and the bird is much more prominent in the frame. The branches on the left help draw the viewer’s eye to the subject, and the perch is quite complementary to the bird. 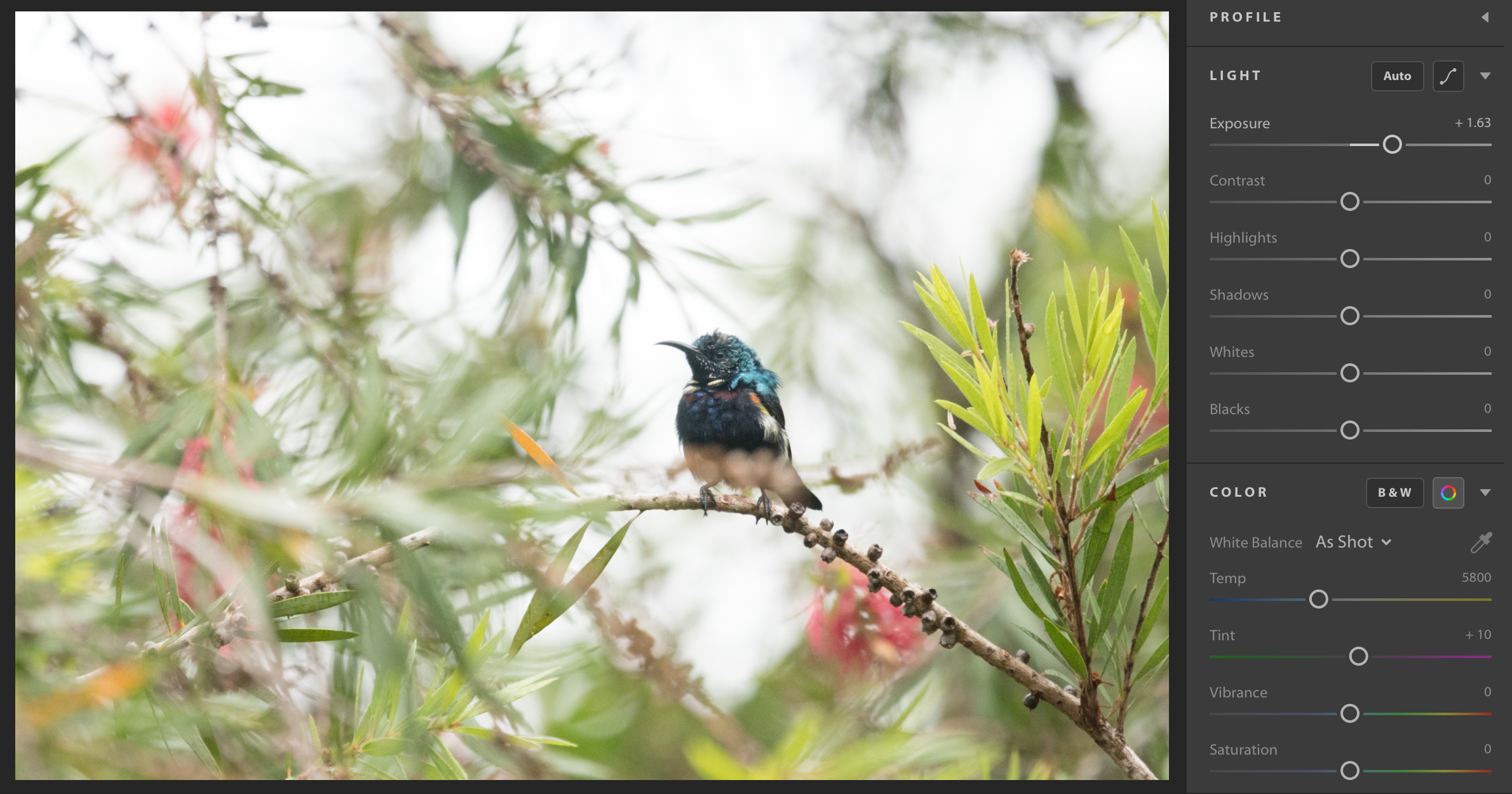 Increasing the exposure by 1.63 stops corrects the second major issue, and we have a decent starting point to build on.

Next, I increased the contrast by 23 points to add some punch to the image. 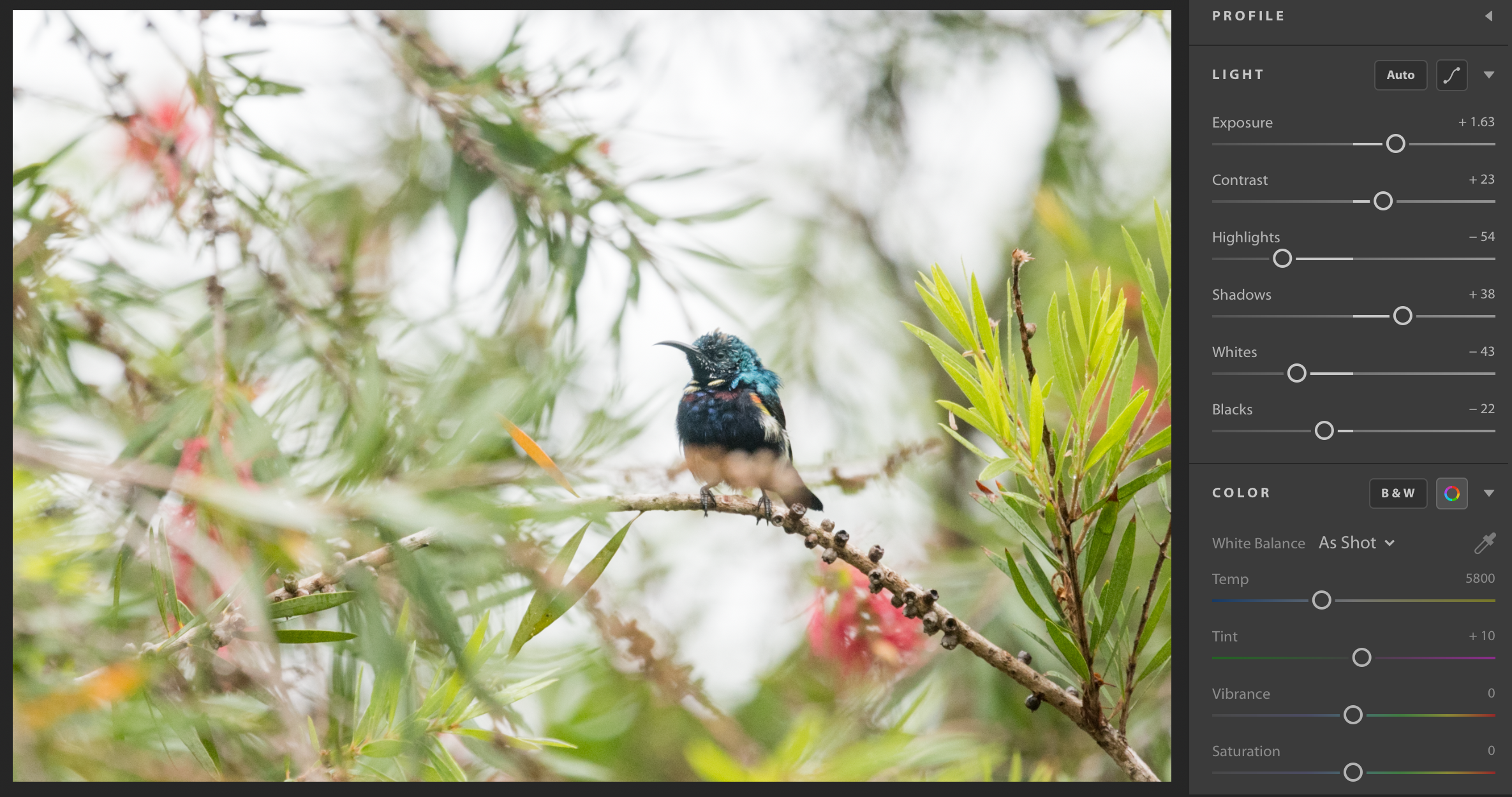 Dropping the highlights by 54 and the whites level by 43 brings out a lot of detail in the background, and raising the shadows even marginally reveals a lot of detail on the bird. 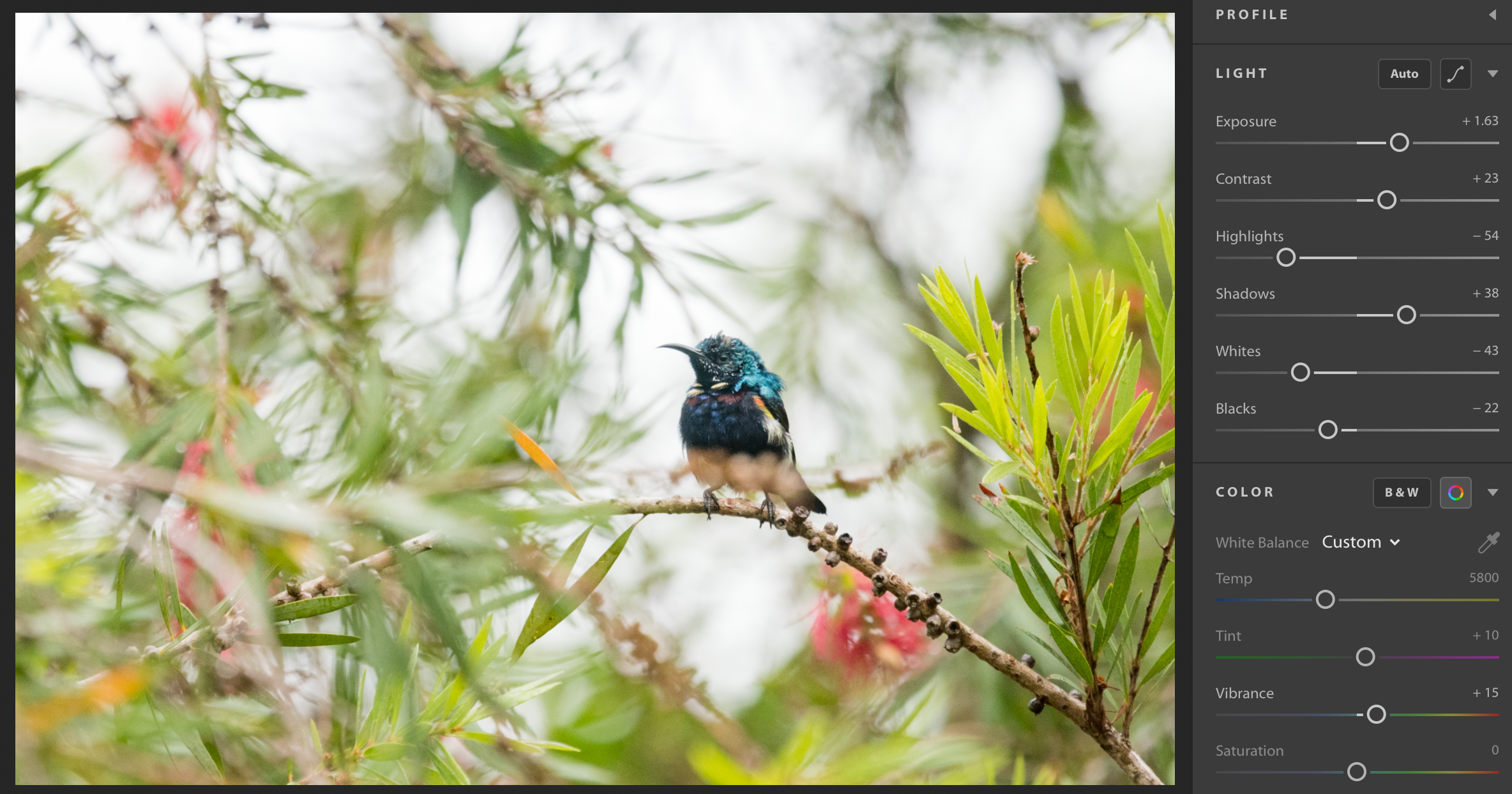 The White Balance and Tint were spot on as shot, so I didn’t bother changing them. I increased the vibrancy by +15 to add some color to the bird.

I also added some ‘Dehaze’ to the image. Dehaze is, in short, smart contrast. It adds contrast to the neutral areas of the image and, when used correctly, can really add a lot of pop to the picture. As the name suggests, the filter also helps in removing haze, but it wasn’t an issue in this case. At this point, the image is looking good and is ready for further editing in Adobe Photoshop.

The most important thing to do after transferring an image into Photoshop is to create a duplicate layer (Cmd + J for MacOS and Ctrl + J for Windows). Any editing on this layer will be non-destructive and can be easily modified. The first changes that I want to make to this image in Photoshop is selective color HSL (Hue, Saturation, Luminance) adjustments through Adobe Camera RAW.

This is Adobe Camera RAW. It is quite similar to Lightroom (notice the exposure and white balance controls on the adjustments panel) and is a very powerful editing tool. The HSL panel is highlighted by the red square. 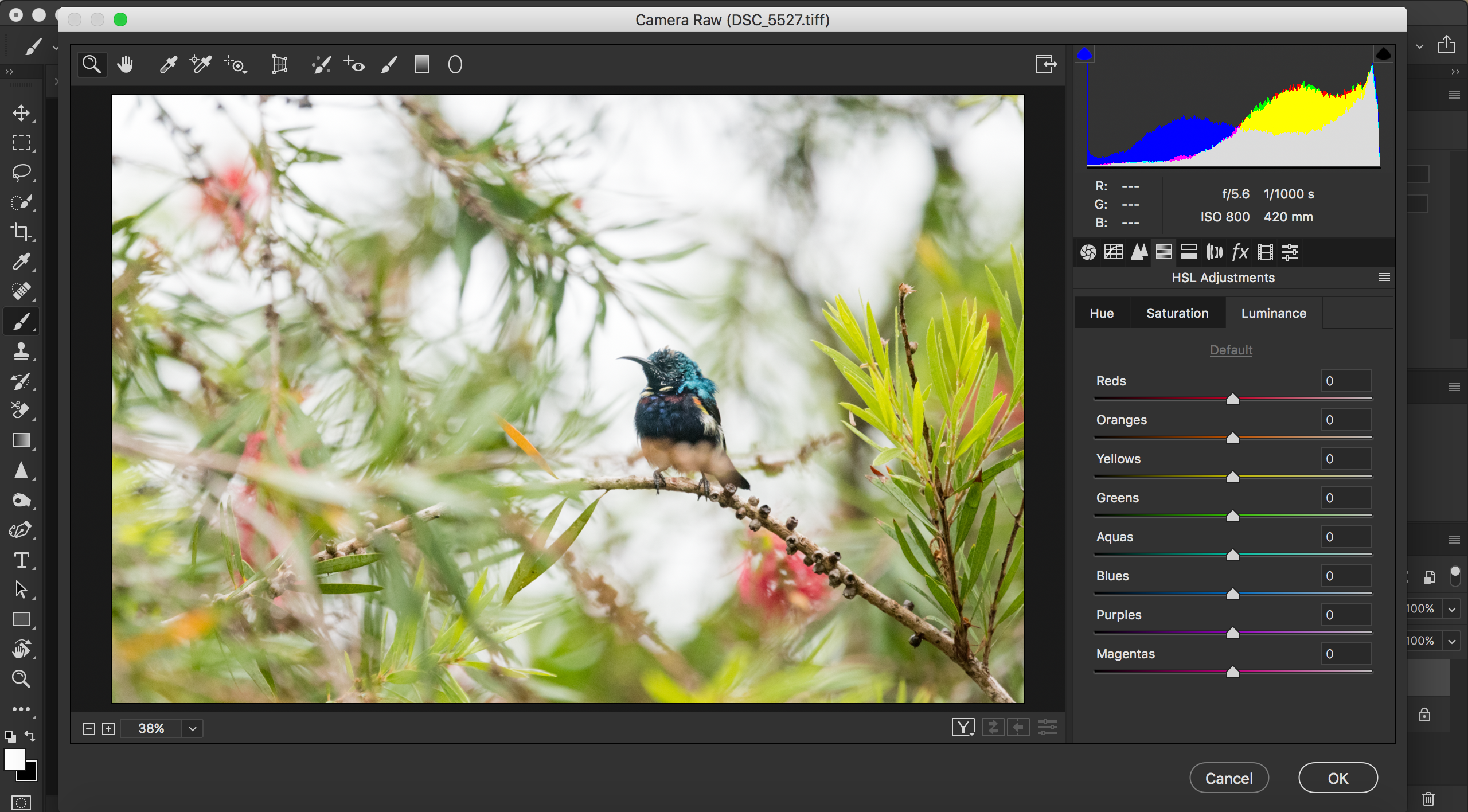 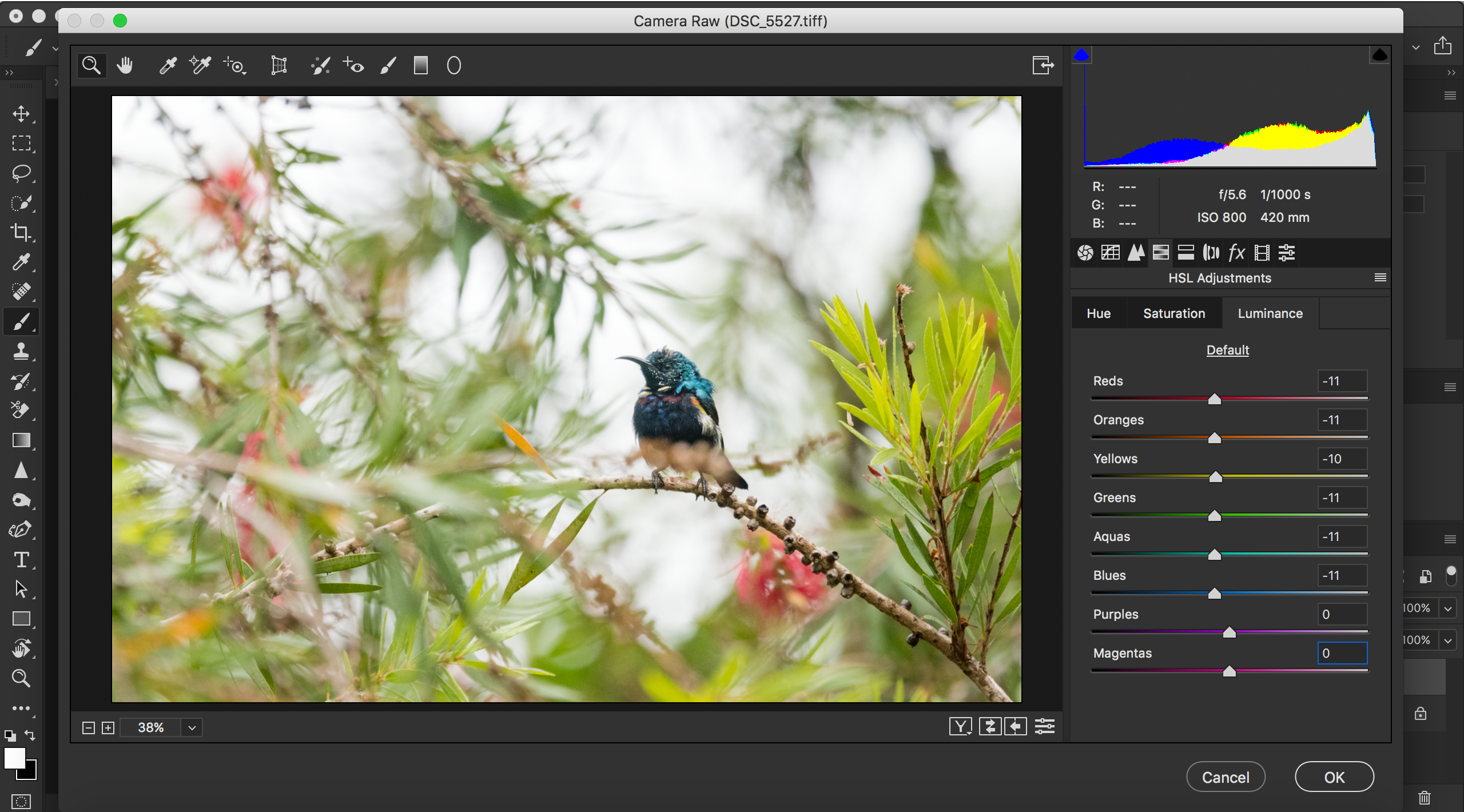 On my laptop’s screen, the greens of the branches, the reds of the flowers in the background, and the cyans and blues on the bird’s head looked too bright. So I brought the brightness of those colors down, but I did not decrease the luminance of purples and magentas. The next step is to correct Saturation.

I’ve increased the saturation of virtually every color (purples and magentas occupied only a very minor portion of the image and adjustments to those colors were not noticeable). Overall, the image is now looking quite vibrant, but not overly so. 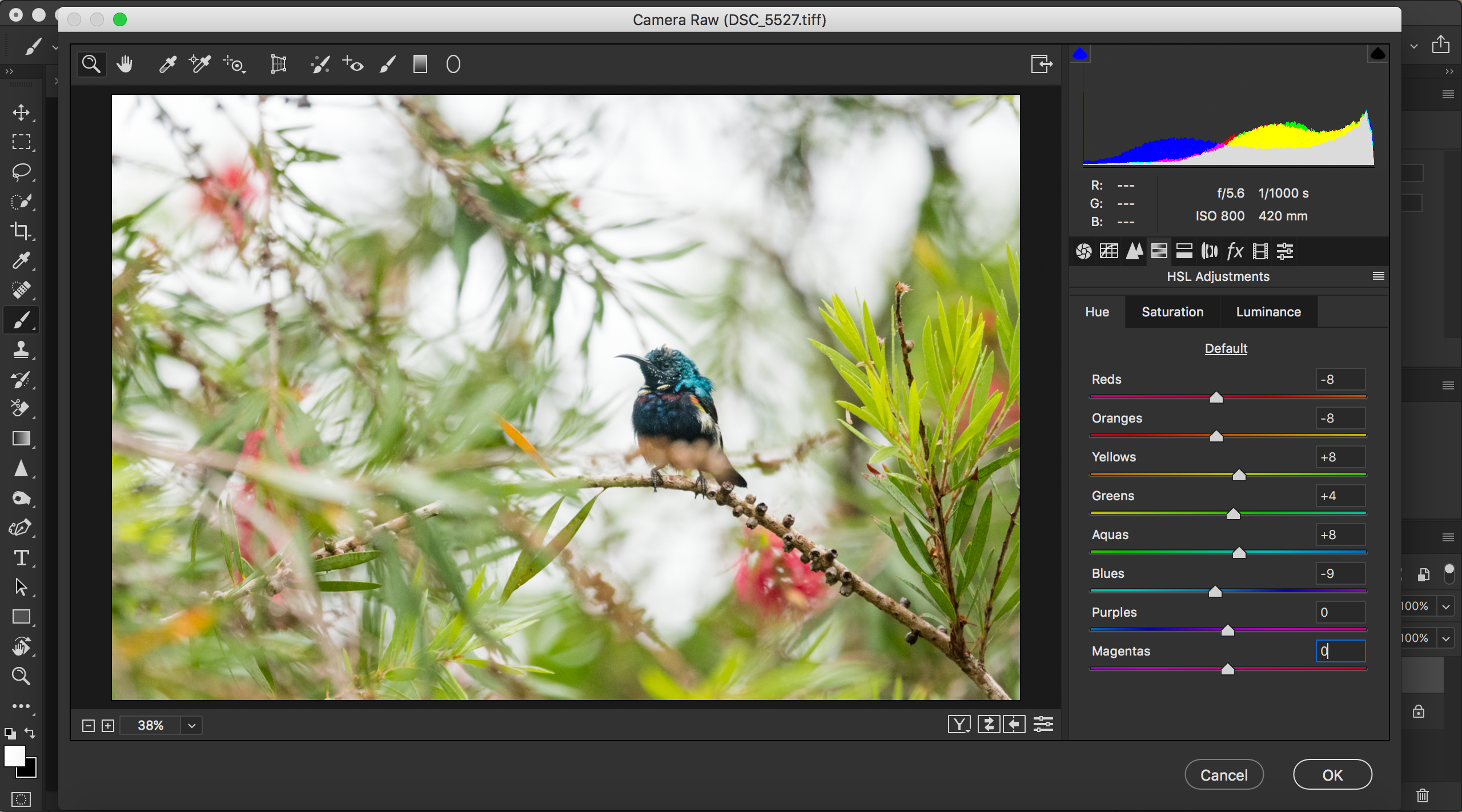 I noticed that the branches had an orange tint to them, so I changed the hue of the greens and yellows to make them look greener, and I also shifted the hue of the cyans and blues to make the bird’s head stand out a bit more. That’s the end of the HSL adjustments and we can move on to the final few edits of this image.

Using Photoshop’s ‘Dodge’ tool, I selectively brightened the bird’s head and breast to extract more detail from the shadows without affecting the rest of the image.

I downsized the image to 2048px on the wide end as I always do for web-sharing.

After downsizing, I applied some sharpening to the image globally using the ‘Smart Sharpen’ filter at a low radius. 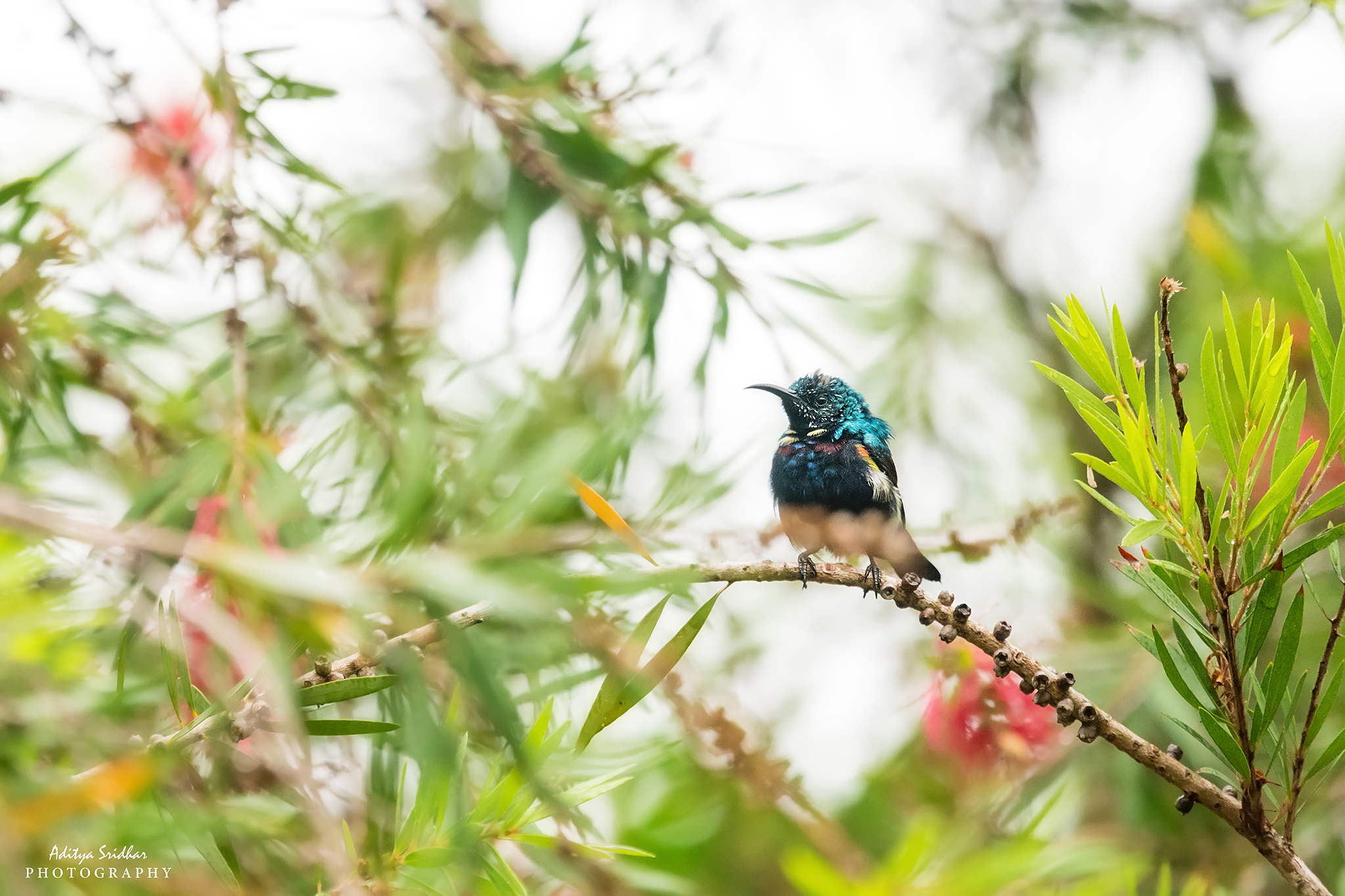 Finally, I added a watermark to the image. It is now ready for sharing and presentation.

The RAW file and the edited picture look nothing like each other. Needless to say, the edited image is a significant departure from the original capture, but that is not necessarily a bad thing. Taking a shot in the field is only a job half-done. The photographer has to exercise some skill and creativity in front of the computer screen to make the captured image the best it can be.