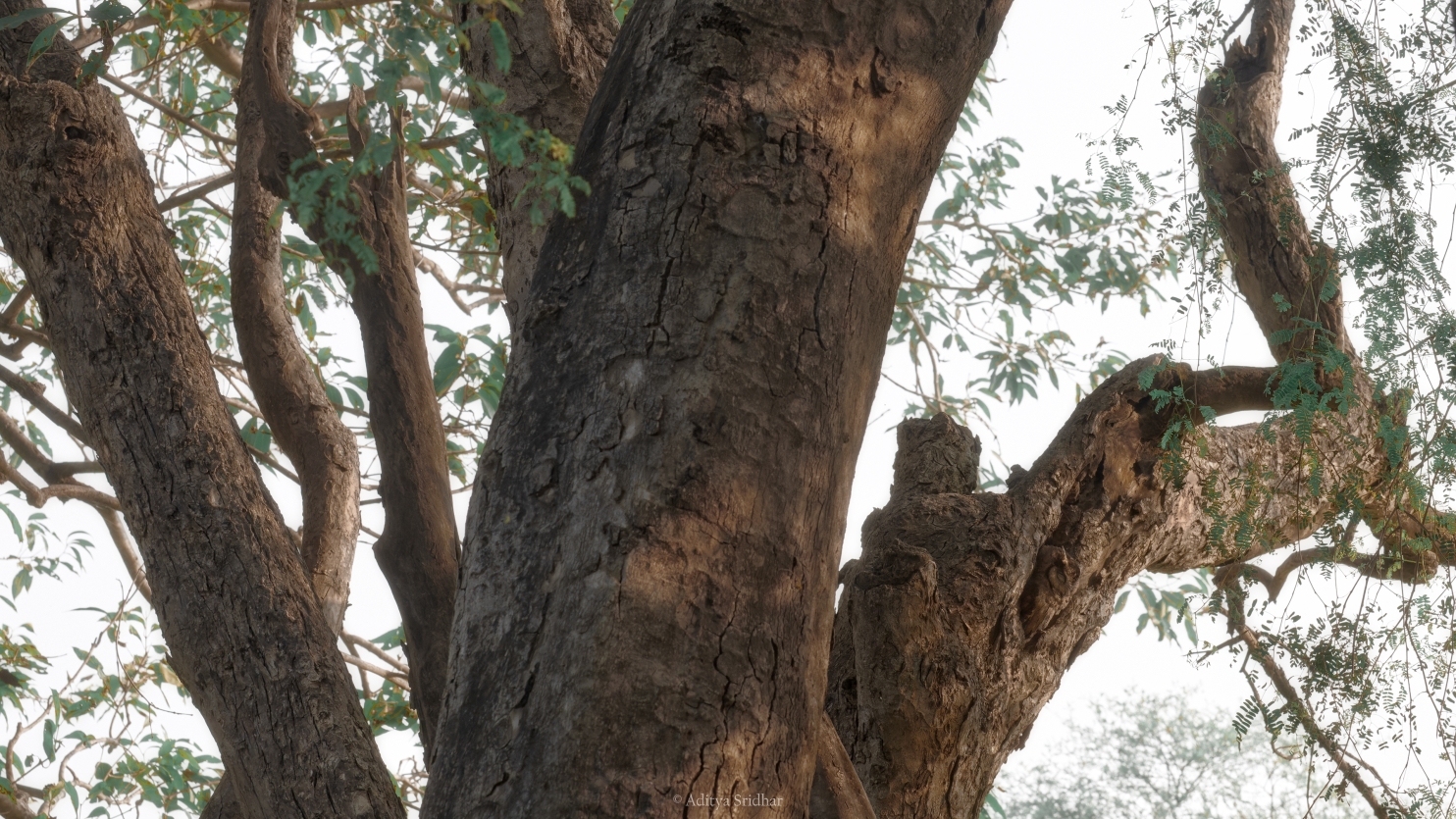 A few weeks ago, I shared an image of a camouflaged Indian Scops Owl that I photographed on my trip to Bharatpur. In that post, I briefly discussed my thought process of capturing that image – to showcase the owl’s mastery of crypsis while also allowing the viewer’s eyes to land on the subject relatively easily. This image is really just an extension of the same concept, but I wanted to lean even more towards making the owl a part of the overall landscape instead of weaving the composition around the bird itself.

As a nature photographer, I try to allow the viewer to experience a scene the way it looked to my eye at the time of capture. While my approach varies depending on the kind of situation I’m faced with – sometimes it’s necessary to use a telephoto lens, but other scenes are best showcased at a wider focal length – the overarching aim is to place the viewer in my shoes.

More recently, however, there’s another, more critical, aspect to image-making that I’ve been trying to take into account, and that is the philosophy of sonder – the deep realisation that every living being around us has a life as complicated as our own. There is so much more to birds than beaks and feathers, and to convey this principle through the medium of photography has been my mission for a while.

With that being said, I didn’t feel too strongly about this image when I shot it – the wide tree trunk in the middle is just so dominant in the frame – but there was a part of me that just loved the idea of allowing the trees and leaves to mask the bird’s presence, forcing the viewers’ eyes to explore the scene, and eventually leading to a pay-off in the discovery of the roosting owl. I felt like it would also give a good idea of how difficult it is to spot this cryptic species, especially in the labyrinth that is the woodlands of Bharatpur.

Another highly important matter I want to discuss is the issue of ethics when photographing such sensitive species (it applies to every bird, though). I was only able to get so close to this bird because I spent around 15 minutes crawling on really rough, dry mud – my knees are, to this day, scarred from the experience. That was the only way I could get close to this bird without being unnecessarily intrusive. It’s crucial to constantly observe changes in the subject’s body language. If you see any signs of stress which, for Scops Owls, are their visibly raised ear tufts and compression of the body, just stop and take a step back. It’s never worth causing another being stress for the sake of an image, no matter how rare they may be.

I photographed this owl on four separate occasions, and three of those sessions were cut short by the arrival of other photographers or tourists who walked right up to the owl in the pursuit of a close-up portrait. On one evening, a group of school-goers even swarmed the owl’s cavity to take a closer look at the bird. The reality is, with a bit of care and a lot of respect, one could pretty easily approach this particular individual.

It all circles back to the kind of footprint we strive to leave, both as photographers and, on a more personal level, as individuals. While there’s only a fine line between anthropomorphism and sonder, it’s paramount to see other living beings as equal, understanding that they have their own fair share of struggles in their day-to-day lives, and that we have a responsibility to act in good faith towards nature and her creations.