It’s been nearly 5 months since my last post on this blog. 5 MONTHS. So I figured it’s time to dust off the keyboard and write a series of blog posts on my recent trip to The Land of Frankincese, Salalah.

First, a bit of a backstory. Even after living in the Middle East for over 15 years, I’ve yet to become accustomed to the searingly hot and long summers and high humidity of the region. So naturally, over the years, I researched places where I could find a bit of respite from the inhospitable conditions during the months of May to October.

Talks about a place in Southern Oman grew increasingly louder every year; a place where the sea meets the mountains to leave the viewer in shock and awe; the only place in the Middle East to have a monsoon season; a place which is more in touch with nature than with technology. This year, I made a vow to visit this mystery paradise before tourism took its toll on its natural beauty and culture.

Salalah is the capital city of the Dhofar Governorate of Oman, and a regional enigma. No where else in the Middle East can you find lush green forests, mountainous African terrain, and pearl white beaches all within a 15 mins drive from each other. I visited Salalah in mid-October, well past the usual monsoon (Khareef) season, and just a week after Tropical Cyclone Luban passed through the region. This turned out to be a blessing as the waterfalls were still active as a result of the storm and the greenery of the forests was intact. October is also peak bird season so that was an additional bonus. That said, however, I would still recommend visiting Salalah during Khareef as the temperatures are lower and the experience is truly something extraordinary. 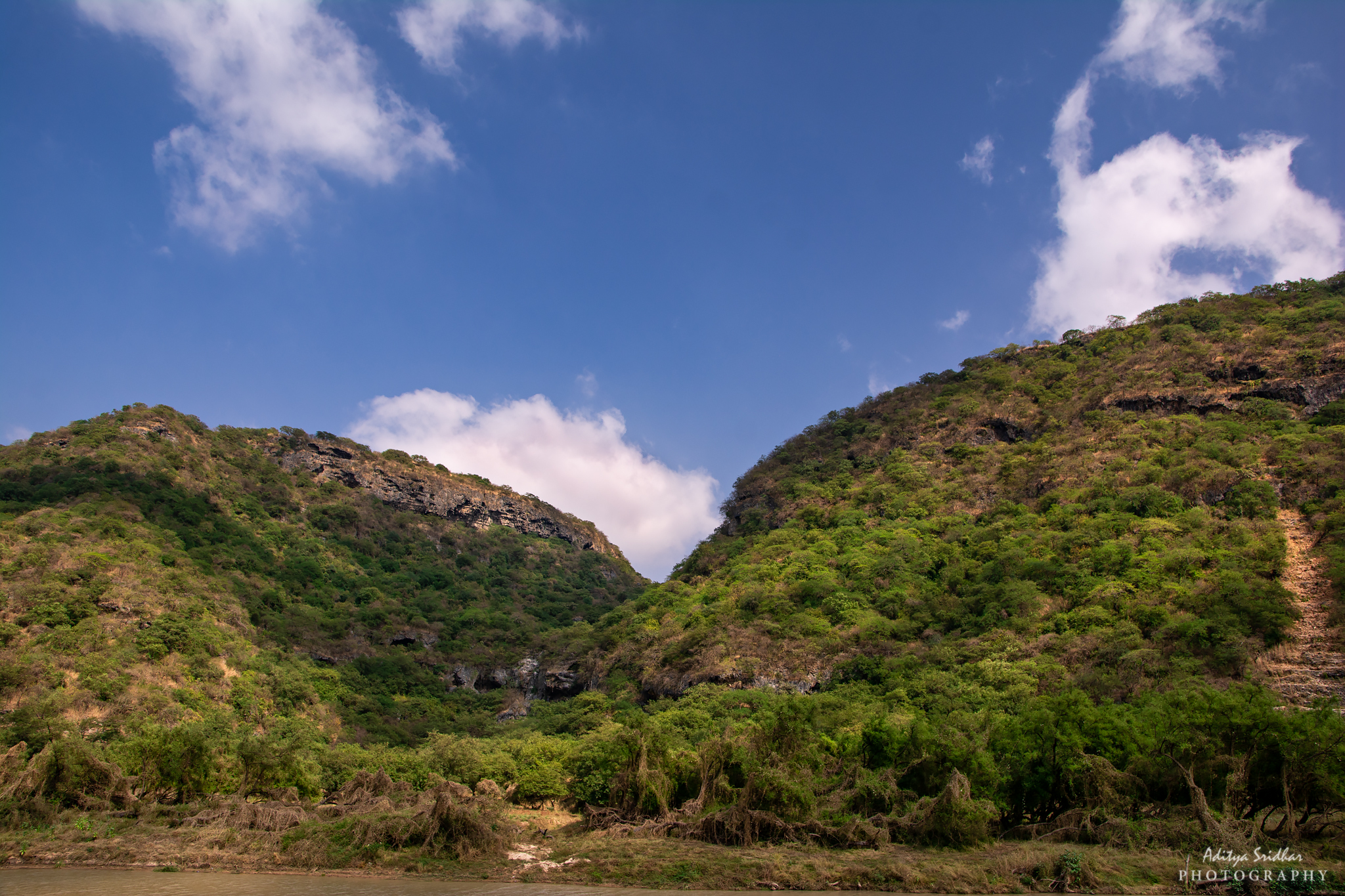 In the first part of this series, we’ll explore the eastern side of the Dhofar region where the terrain is remarkably African compared to the more Asian landscape observable in the rest of the Middle East.

The first stop of the trip was Ayn Sahalnoot, a natural spring around 20 mins away from the city centre. It was a beautiful spot with hundreds of tiny damselflies and dragonflies flitting above the water’s surface. The jagged orange rock face above the calm teal water of the spring made for a very interesting subject. Birdlife at this location was also diverse – from the colourful Grey-headed Kingfisher to the elegant Citrine Wagtail being present near the water body and the adjacent stalactites. 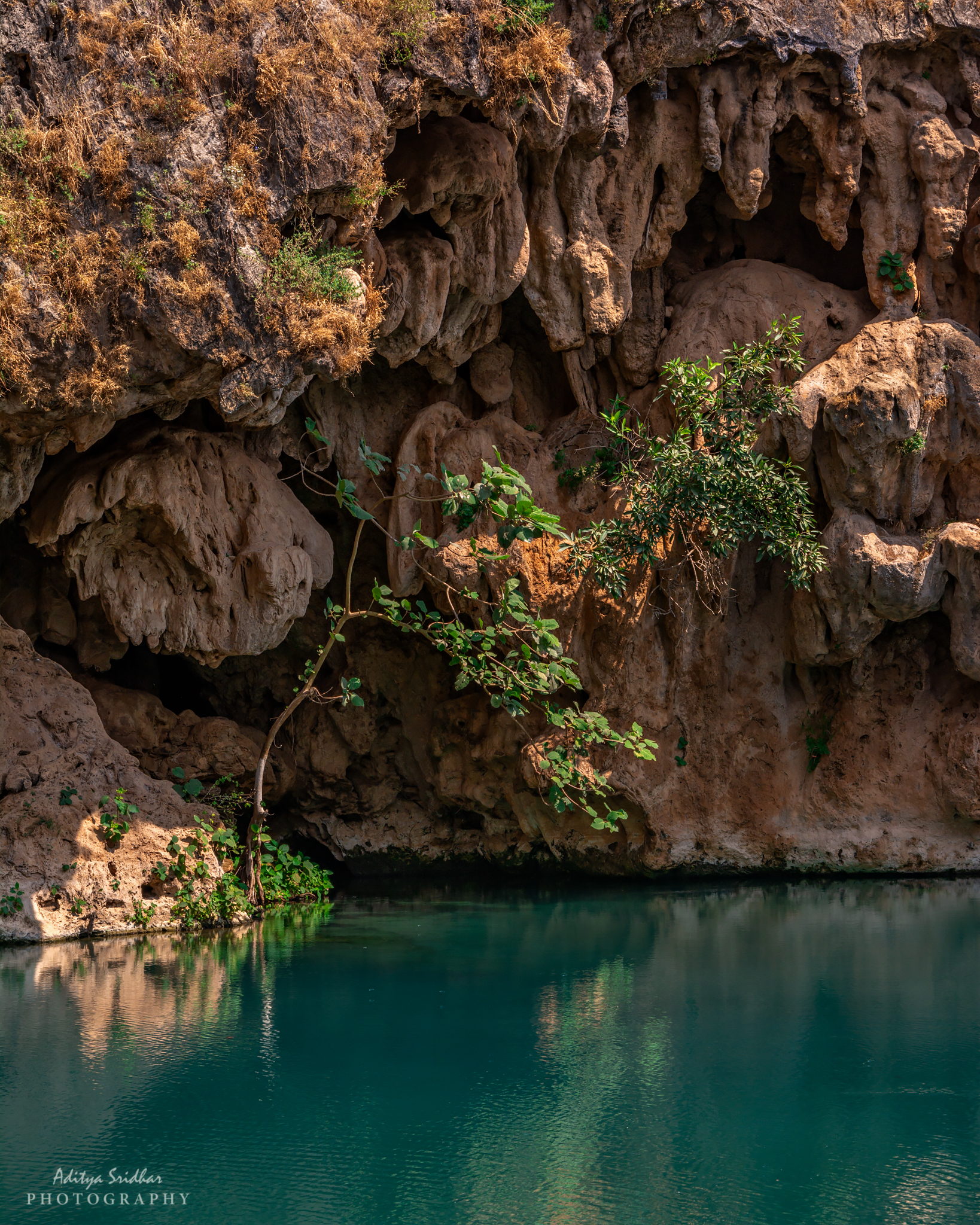 After capturing a few photographs at this spot, I moved on to the next location, the sinkhole at Tawi Attair. It’s one of the largest sinkholes in the world and is also known as ‘the well of birds’. Obviously, I had high expectations of the place…until I saw it for myself. While by no stretch of the imagination was it bad, it certainly wasn’t what I made it out to be based on the research I performed beforehand. The viewing platform was quite small and only allows a single perspective of the sinkhole. We also visited the place in the afternoon, so bird activity was very low, with the only interesting species spotted being the rather common Cinnamon Breasted Bunting. I did not spend a lot of the time at this site as I was looking forward to visiting the next location that my guide (@m.b.a.almashani on Instagram) was going to take me to – Jabal (Mountain) Samhan. 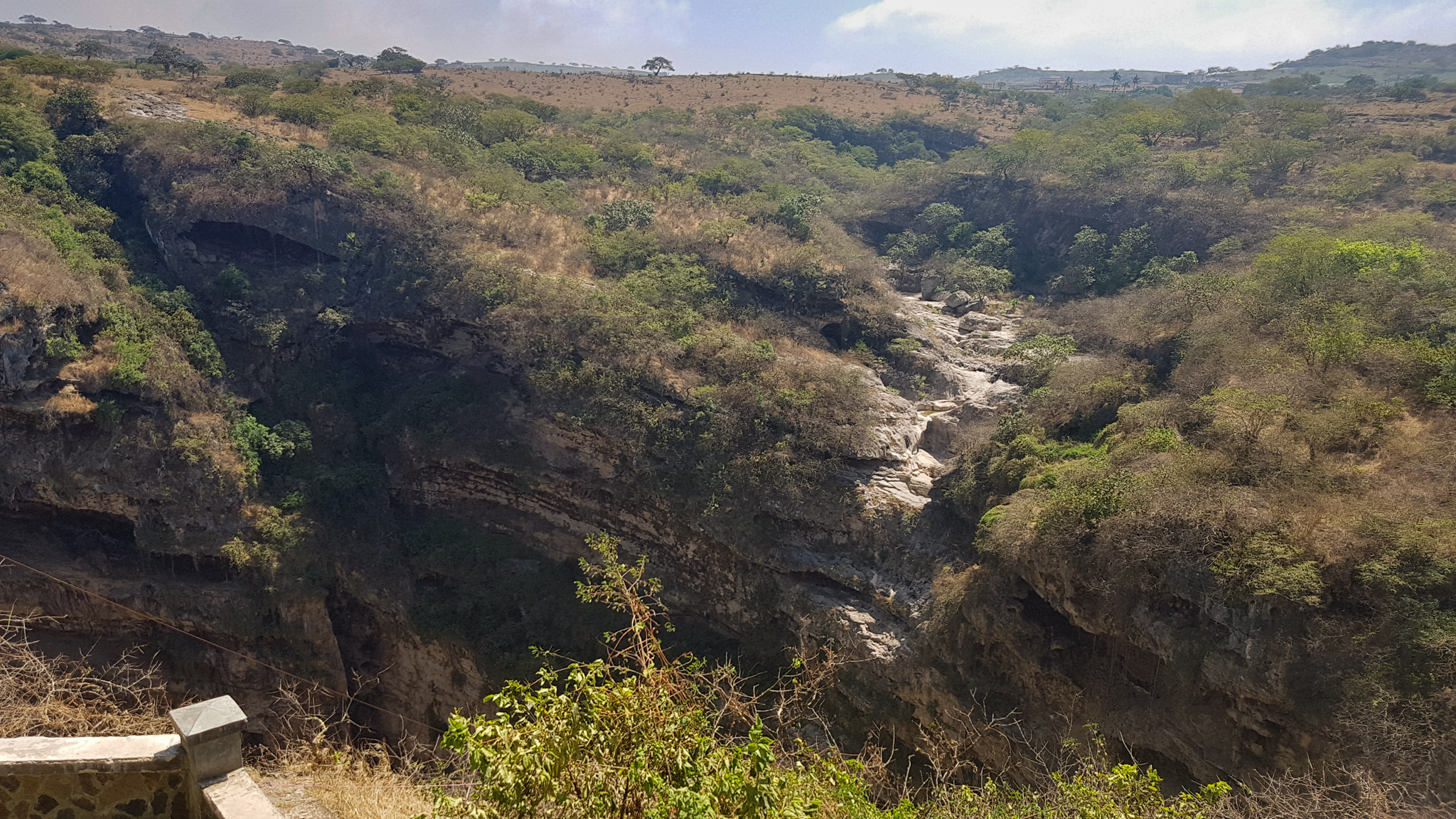 Jabal Samhan is a site of high ecological importance, being one of the last refuges for the Arabian Leopard and various other species. The view from the peak of the mountain is simply breathtaking and cannot be put into words. 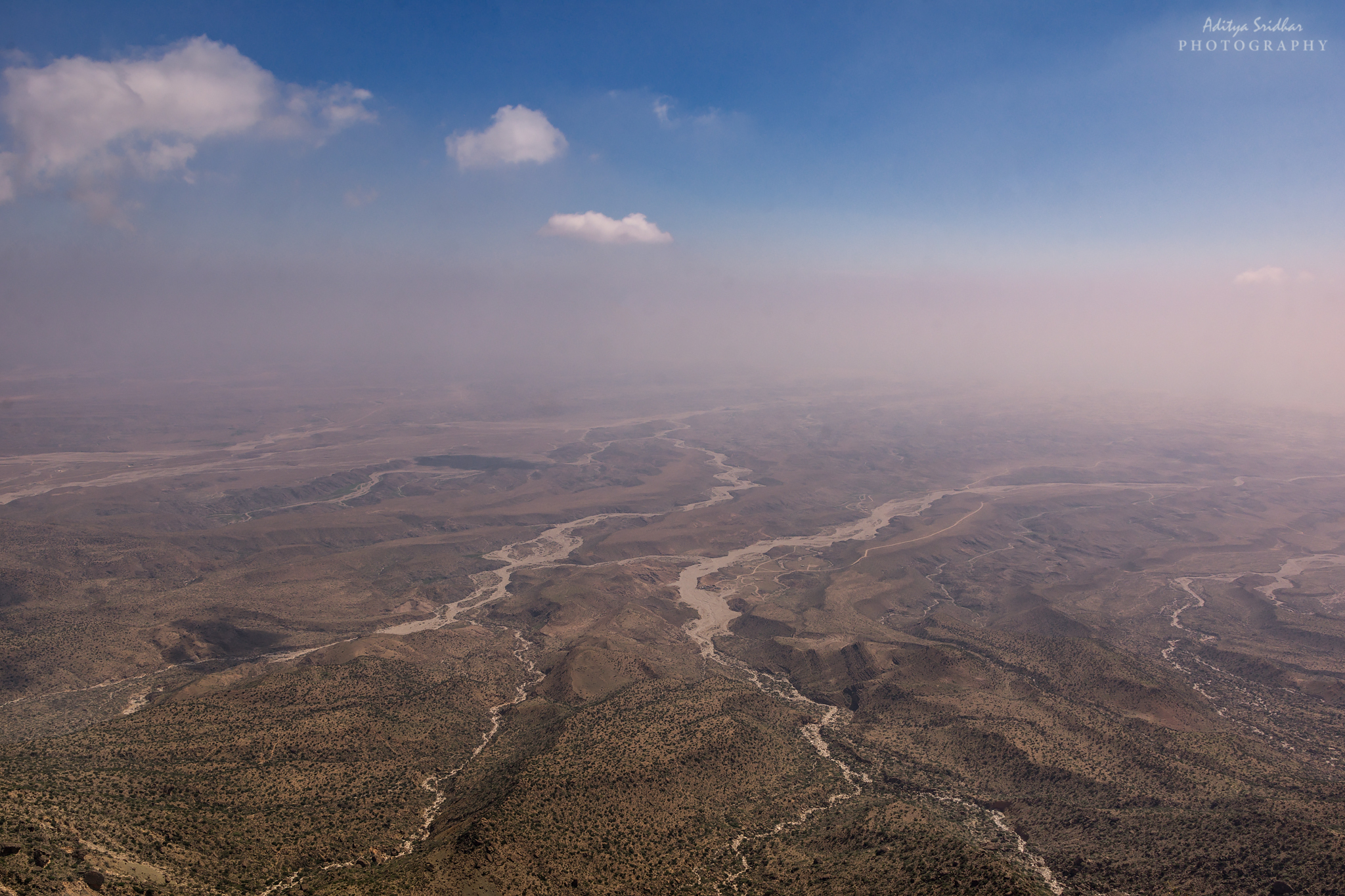 More interestingly for me, being a birdwatcher, Jabal Samhan is also one of the few areas in the world where the majestic Verreaux’s Eagle can be found, although the chances of seeing, let alone photograph, one are incredibly slim.

As I was taking the picture displayed above, I noticed a large, dark blob enter and leave my field of view in a flash, but I did not have the opportunity to track it as it disappeared into the haze. I decided to switch cameras in case the mysterious entity showed up for a second fly-by. I had exactly 3 seconds to change systems before another shadow loomed over my being – IT WAS THE VERREAUX’S EAGLE! The second bird was far more forgiving than the first one and allowed me to capture a series of flight shots before it too, like the first individual, blended into the thick atmosphere. It was a dream come true for me and an experience that I’ll cherish forever. 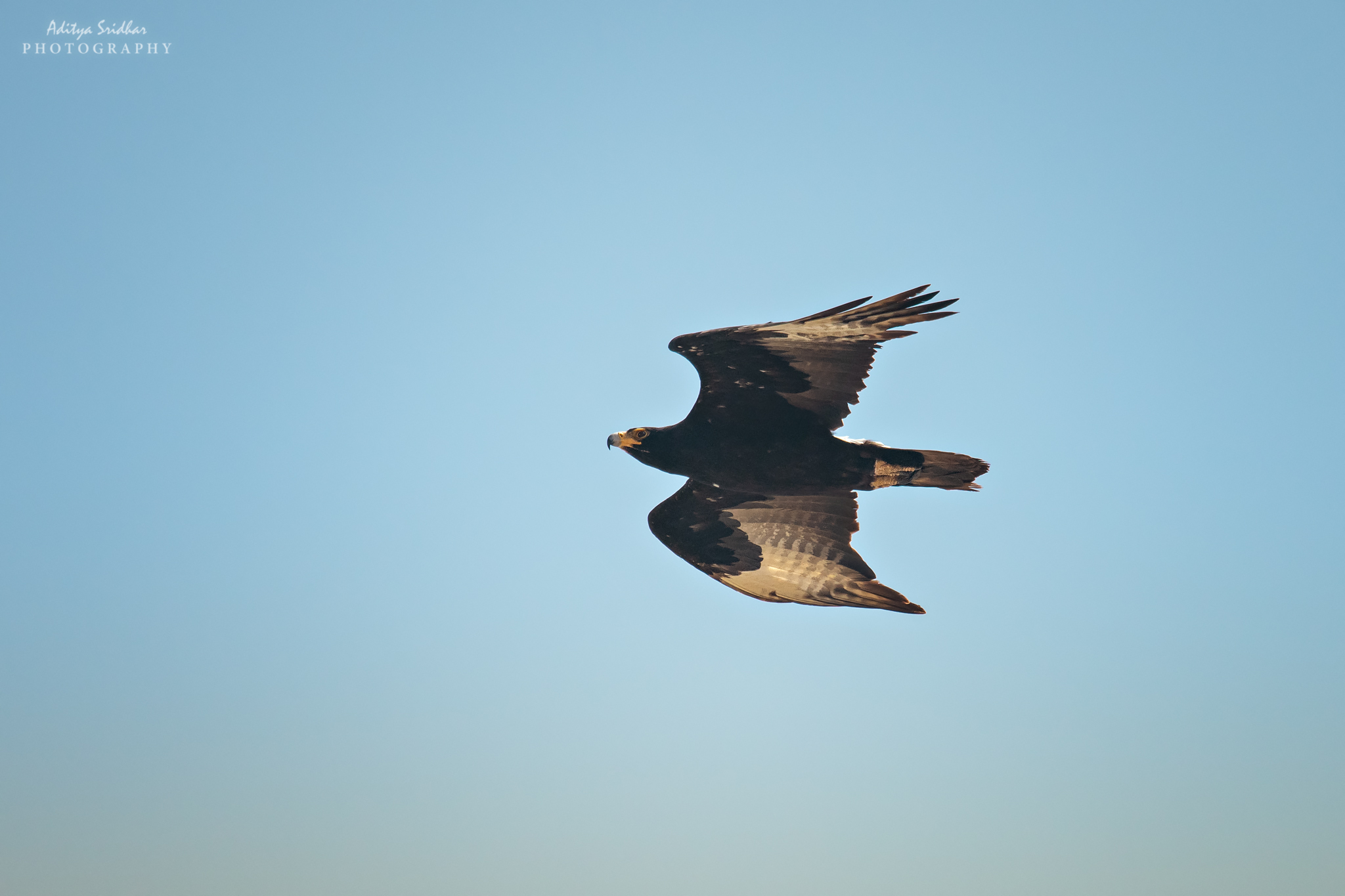 I spent a few minutes celebrating and a few more to gather myself before deciding to head to the next and final spot of the day, the famous Wadi Darbat. The waterfalls of Wadi Darbat are a sight to behold, especially during the Khareef. Usually the waterfalls are not active during the winter, but as mentioned beforehand, the recent cyclone replenished the falls and they were going strong during the time of our visit. The road to the valley was quite nice, with dense vegetation on either side and lots of camels along the way. 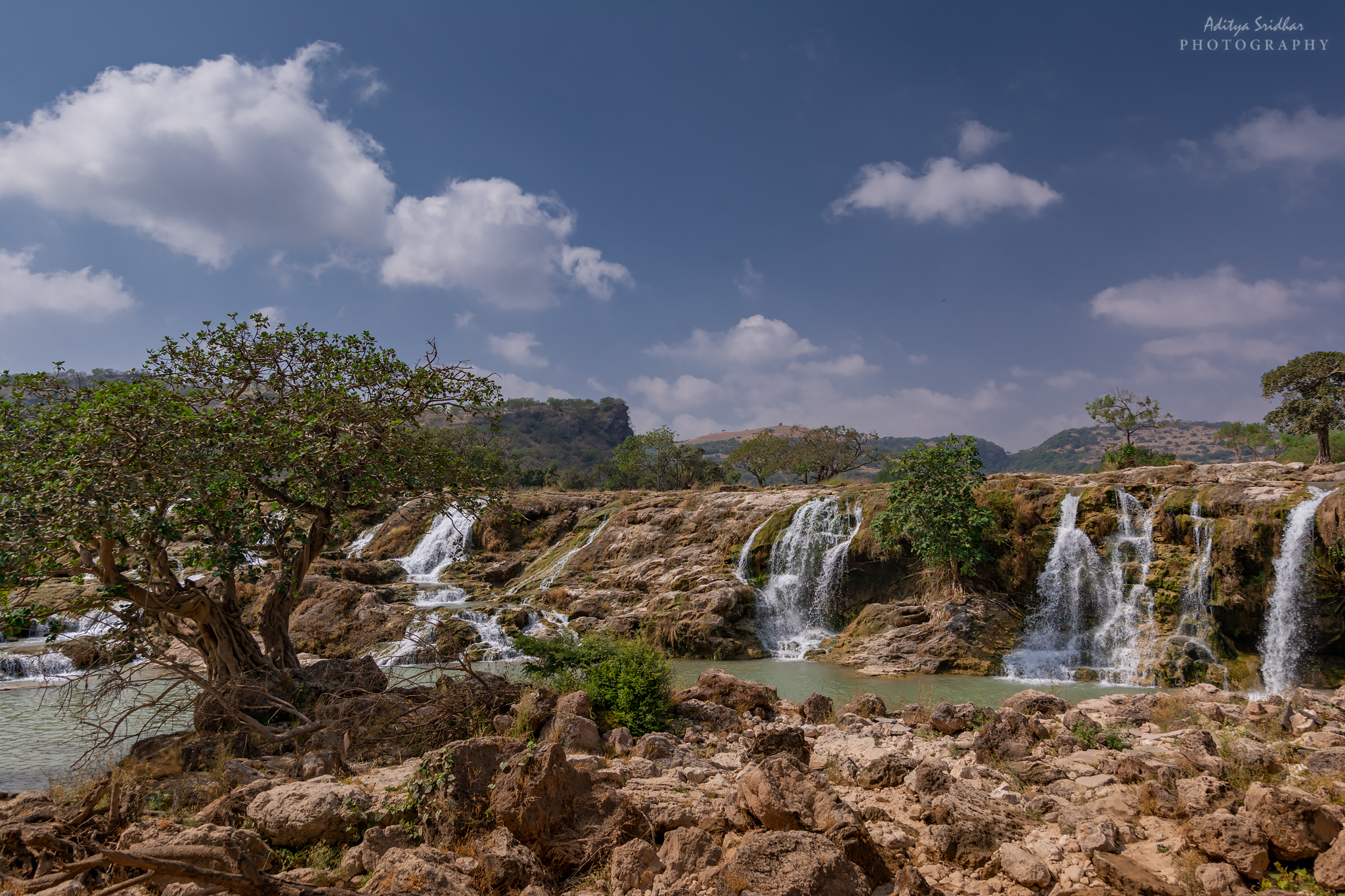 After a brief look around Wadi Darbat, my guide decided to take me to a larger set of waterfalls. Getting to the falls was a challenge, testing every bit of the Land Cruiser’s off-roading ability. We eventually managed to get to the site and now it was my balance and courage that was going to be put to the test – the path to the waterfalls was narrow and unstable, being no more than a meter in width, and any misstep would cause me to tumble down the steep slope of the Wadi. Was it worth taking the risk just to get a slightly better view? In hindsight, perhaps not, but I did it anyway and made it out with a few decent images (and PTSD lol). 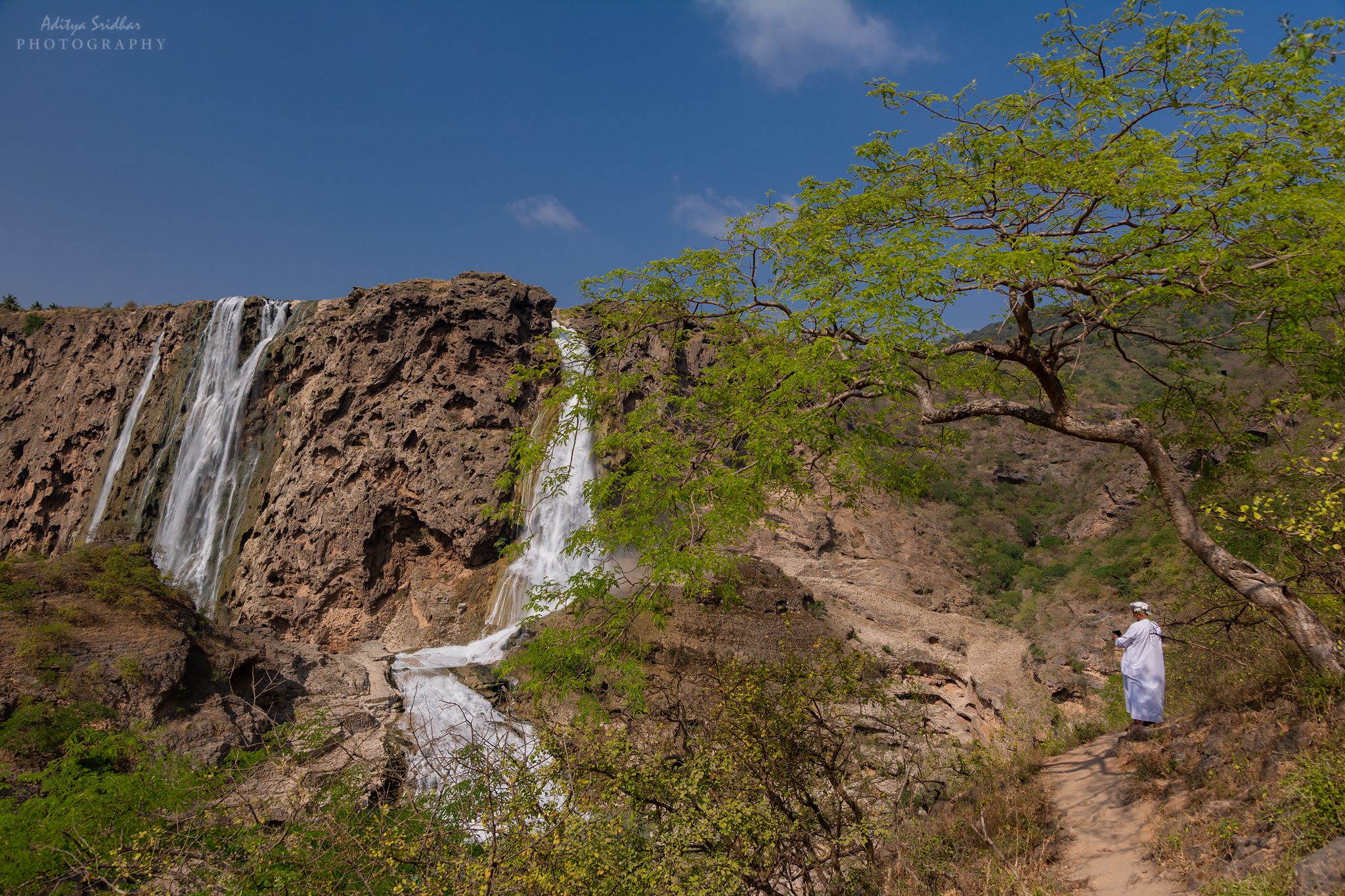 After the slightly traumatizing ordeal, I headed back to my hotel to rest and recuperate, and get ready for the next day’s activity. That, however, is a topic for the next blog post 😉

I’ll end this post with a picture of a Pale Craig Martin that I photographed from the balcony of my hotel room. It’s pretty amazing how acrobatic these tiny birds are. They’re insanely difficult to photograph, especially in full flight. 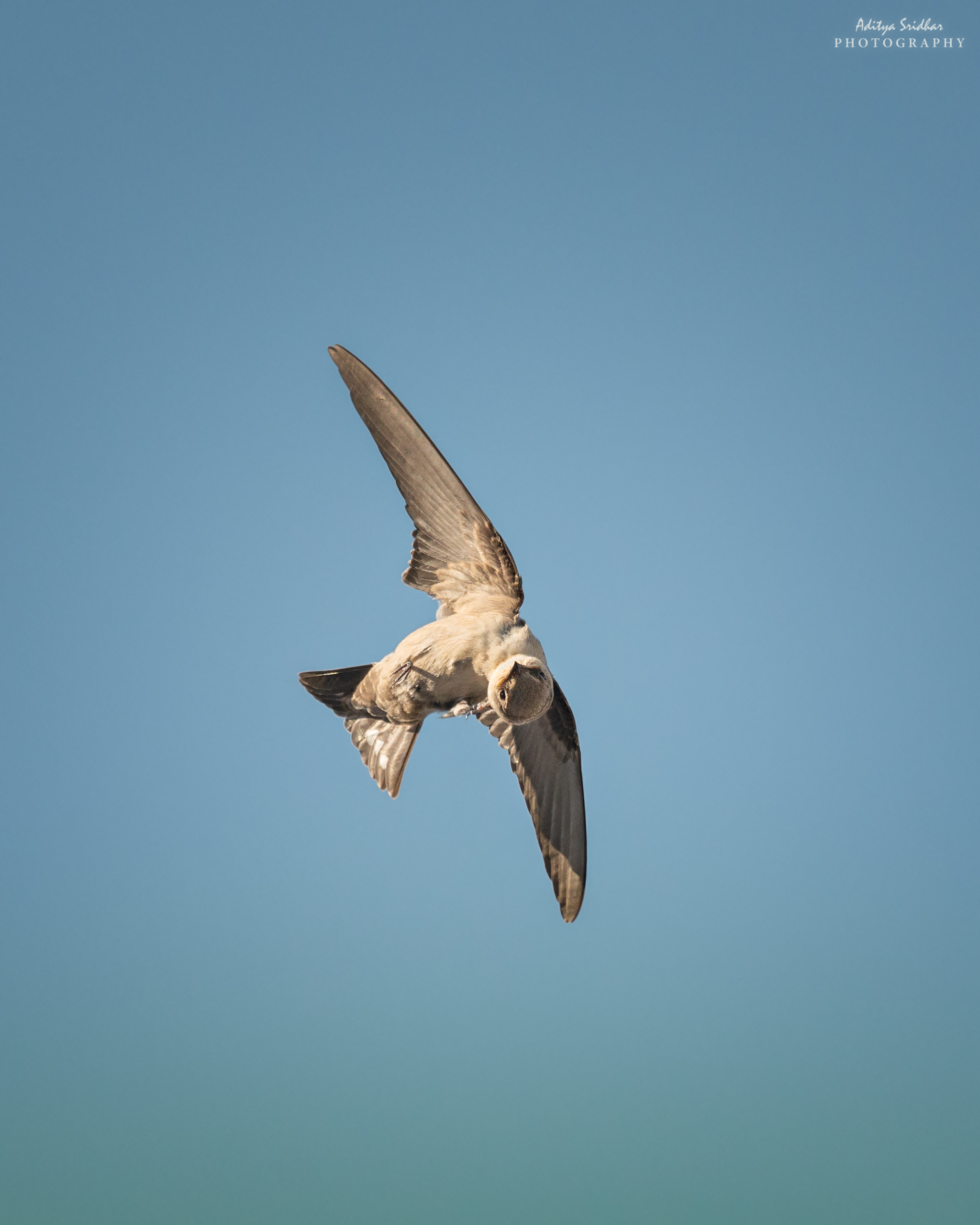