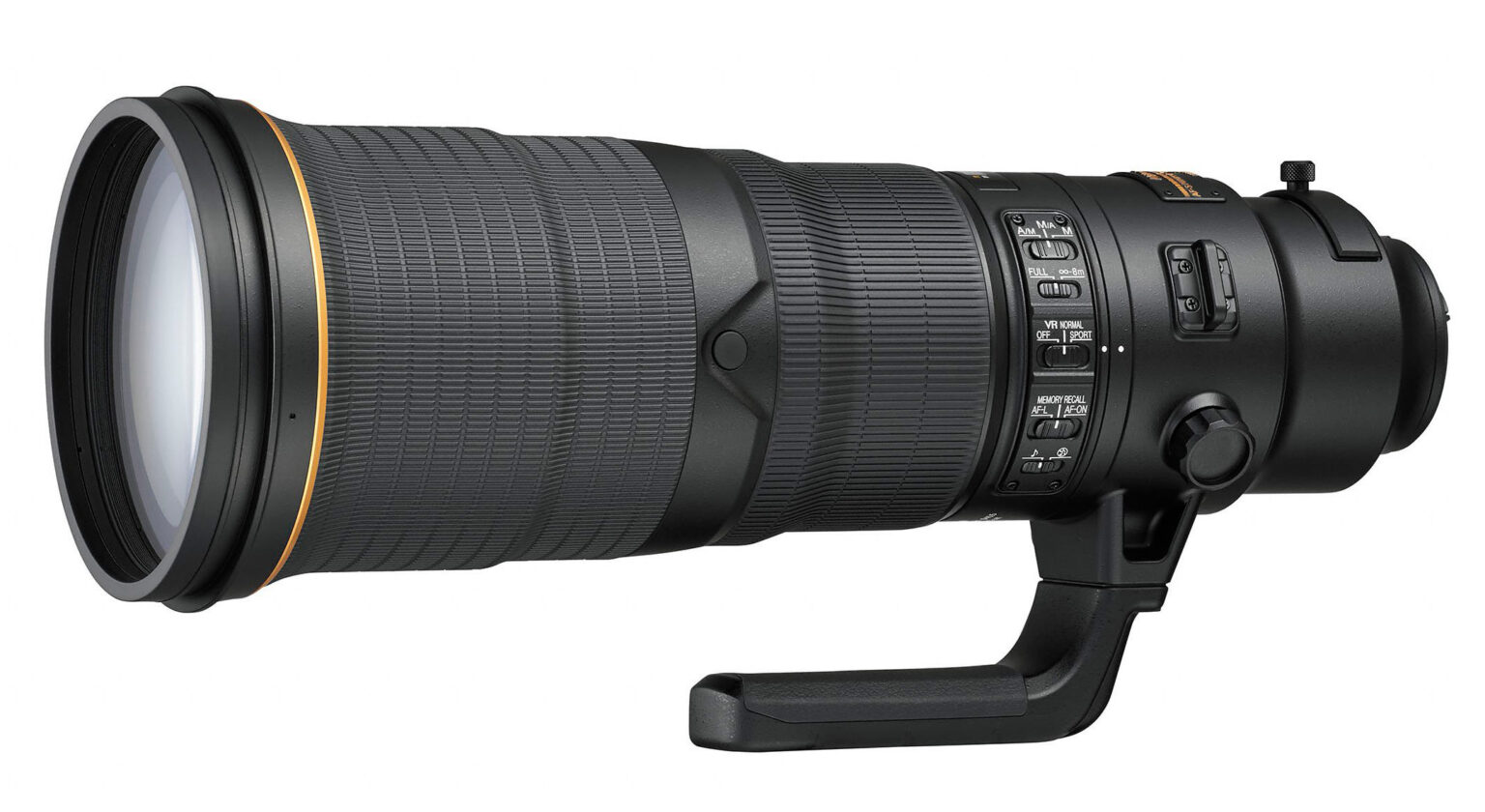 A while ago, I dropped my trusty old 500mm PF – a gem of a lens – onto hard concrete, decentring the optics and rendering it completely unusable. As a result, I purchased a used 500mm f/4 that I found online for a good price. At the time, I was quite unsure about the big prime’s performance and overall value compared the smaller, lighter, and infinitely easier-to-handle 500mm PF. If you want to read my initial impressions and comparisons between the two, here you go.

When you’re looking at such an expensive, heavy piece of glass, you expect only the best in terms of performance, build, optics, and quality. While I haven’t used any of the other Nikon big primes, I can safely say that the FL is a notch above the PF. Of course, it is; It only costs twice as much!

Having used the PF for over a year, however, I know it’s a solid performer itself, being made out of metal and having excellent optical characteristics.

Okay, I’m not one for test charts and MTF curves. I only care about a lens’s performance in the field, and the FL doesn’t disappoint. Here’s how I see it:

As you might’ve probably guessed, the main difference between the PF and the FL is the former’s narrower aperture. While it may not seem like a big deal at first, it absolutely is.

Let’s think of a couple of scenarios:

There are a few other things to consider, too.

With the FL lens, you can attach a 1.4x tele-converter to get to 700mm with an effective maximum aperture of f/5.6. Most of the auto-focus points will still be functional, and image quality only takes a very minor hit. On the other hand, while the PF still has excellent sharpness with the tele-converter attached, auto-focus performance jumps off a cliff. Only the centre AF-point works, and you’ll have to focus and recompose if the subject is placed towards the edge of the frame.

I’ve found it quite easy to hand-hold the FL, too. It took me a while to get used to the FL’s size and heft, but the lens is really well-balanced. In the field, it doesn’t feel as heavy as I thought it would feel. I’ve been able to consistently photograph birds in flight with the FL, and the combination of the VR, auto-focus performance, and balance just makes for a great shooting experience. It does get a little tiring after a while, however, so taking regular breaks is, pretty much, a necessity.

I love this lens to bits. It’s just so easy to carry around, especially while travelling. I’ve also shot a few images with this lens that I absolutely could not have captured with the FL. Do I think it’s better than the big prime? I’d say it’s mostly situational.

First, let’s discuss the merits of the PF. It’s a compact, light-weight prime with incredible image quality and auto-focus performance at a very reasonable price point. The Vibration Reduction (VR) system, combined with the lens’s size, makes it a real pleasure to hand-hold.

Compared to the FL, I’d say the biggest advantage the PF has in every use case is its manoeuvrability. I’ve taken shots with the camera and lens held overhead that turned out perfectly sharp. Let me give you an example.

This is one shot I just could not have captured with the big, bulky FL. I held the PF well above head-height, composed using live view, and the shot still turned out sharp. I was even using a 1.4x tele-converter. Make no mistake, the PF is a real contender despite its relatively slower aperture.

Another thing I’ve noticed is that most birds are not as intimidated by the smaller silhouette of the PF when compared to the much larger f/4 lens. On many occasions, I’ve accidentally spooked birds with the FL that I probably wouldn’t have with the PF.

The PF is also a dream to hand-hold. It almost feels like using cheat codes. It’s so ridiculously easy to find, place, and track birds in flight with this lens. The bare PF lens has really good auto-focus performance under most lighting conditions, and the VR is tremendous, too.

I’ve discussed the various quirks of the 500mm PF and its performance in a couple of earlier blog posts. You can find them here and here.

This is one question that I can’t really answer, but I can give you my rationale for settling on the FL. I like to push my gear to its limits, both in terms of settings as well as conditions – be it weather or lighting. I usually find myself often shooting way before sunrise and after sunset, and those are situations where the FL just can’t be beat. Yes, it’s unwieldy at times, but it gets the job done.

The lens’s auto-focus remains solid even in very low light, and that’s something I can’t say about the PF. The slower lens, sometimes, doesn’t lock onto the subject with the same speed and surety of the FL.

Do keep in mind that everything circles back to the main consideration for most people – the price. Yes, the 500mm FL is an amazing lens, but it also costs twice as much as the PF which is already an expensive piece of glass. Most people would get a lot of value out of the PF, and the FL is an incremental, but noticeable, step-up.

If we take a step back and look at the current Nikon ecosystem, there’s been a lot of focus on the mirrorless line-up of late, and that’s not going to stop anytime soon. As a result, both 500mm lenses should be available at really good prices going forward as Nikon slowly phases out the F-mount system. Of course, you can always use these lenses seamlessly on Z-mount cameras with the FTZ adapter, too. I’d say the FL and the PF hold their value really well over time, and you can’t really go wrong with either of them in that regard.

If I had a mirrorless camera body and was in the market for a lens of this kind, though, I’d probably take a close look at the other super-telephoto offerings from Nikon. The 400mm f/4.5, the 800mm f/6.3, and the 100-400mm Z-mount lens are all stellar performers in their own right. They are marred by supply chain issues, however, and obtaining one of those may not be as easy as purchasing a used 500mm PF or FL at present.

I’ve been in the unfortunate position of having dropped both of these lenses. My FL recently survived a drop off the seat of a rickshaw onto, you guessed it, concrete. Thankfully, it came out unscathed, unlike the PF. That wasn’t really a comparison, just a weird co-incidence.

I’ll also briefly touch upon the lenses’ performance in back-lit situations. While I’ve never had any weird artefacts in my images from the PF’s fresnel glass, I’ve noticed that its auto-focus can, occasionally, be thrown off when the sun’s in the frame or at an awkward angle. I’ve yet to have that issue with my FL but, again, I’m being very nit-picky here.

In all honesty, I don’t think you could go wrong with either of the two lenses I’ve mentioned. If you find yourself shooting in challenging lighting conditions where auto-focus performance is critical, then you’ll probably find yourself leaning towards the FL. If you’re usually shooting birds in flight in good light, then the PF won’t let you down. It’s so much fun to use, and I think that’s important. After all, why own expensive gear that you don’t feel like using on a regular basis?

Regardless of which lens you choose, it is only a tiny cog in the machine that is photography. As long as you can find workarounds to the limitations of your gear, they’ll serve you well in the long run. A no-compromise product doesn’t, and cannot, exist.

I hope you found this post interesting and informative! If you’d like to ask me any specific questions regarding either of the two lenses I’ve featured in this post, feel free to leave a comment down below or send me a direct message on Instagram (@aditya.sridhar) and I’ll get back to you as soon as possible!